Monthly Issue The Sustainability of Sport Climate change has threatened football games, disrupted tennis matches, and posed major risks for soccer pitches. Gone are the days when only the likes of skiers or sledders needed to worry about a warming planet. Yet despite their shared vulnerability, the four major North […]

Monthly Issue
The Sustainability of Sport

Climate change has threatened football games, disrupted tennis matches, and posed major risks for soccer pitches. Gone are the days when only the likes of skiers or sledders needed to worry about a warming planet. Yet despite their shared vulnerability, the four major North American professional sports leagues have not exactly stepped up to the plate for the climate.

If any of the big four leagues decided that it wanted to quickly reduce its carbon footprint in a substantial way, however, there’s low-hanging fruit that is ready to be picked: reducing air travel, which generates significant carbon dioxide emissions that trap heat within Earth’s atmosphere.

This is not a theoretical proposition. It’s completely doable. In fact, it already has been done. In response to the coronavirus pandemic, the National Basketball Association, National Football League, National Hockey League, and Major League Baseball made changes to their schedules in 2020 to keep players and staff safe. These changes ranged from shortening seasons to canceling international games.

Critically, these changes meant less flying – and with that, fewer emissions. In a paper published last year in the journal Environmental Science and Technology, I took a deep dive into the effects of these shifts, finding that if the four leagues maintained their pandemic scheduling changes, the changes would cut their overall carbon footprint from air travel when compared to a normal year by 22 percent.

I came to this figure by first calculating league emissions in 2018. I converted each team’s schedules, including preseason and playoffs, into a list of flights, and then calculated the emissions of each flight. Together, the four leagues generated almost 122,000 metric tons of carbon dioxide from air travel alone. The NBA had the most emissions due to having a longer season and using larger aircraft, followed by the NHL, the MLB, and the NFL, which had the lowest emissions because it has the fewest games on its schedule (but the highest emissions per game).

Next, I looked at the 2020 season and evaluated how changes made to the schedules by different leagues reduced their emissions per game. The most important change was the introduction of “baseball-style” series scheduling. As the term implies, it’s routine practice in MLB to have two teams play each other in the same city multiple times in a row. The NHL implemented this policy aggressively in 2020, and it helped the league cut its emissions by 33 percent. 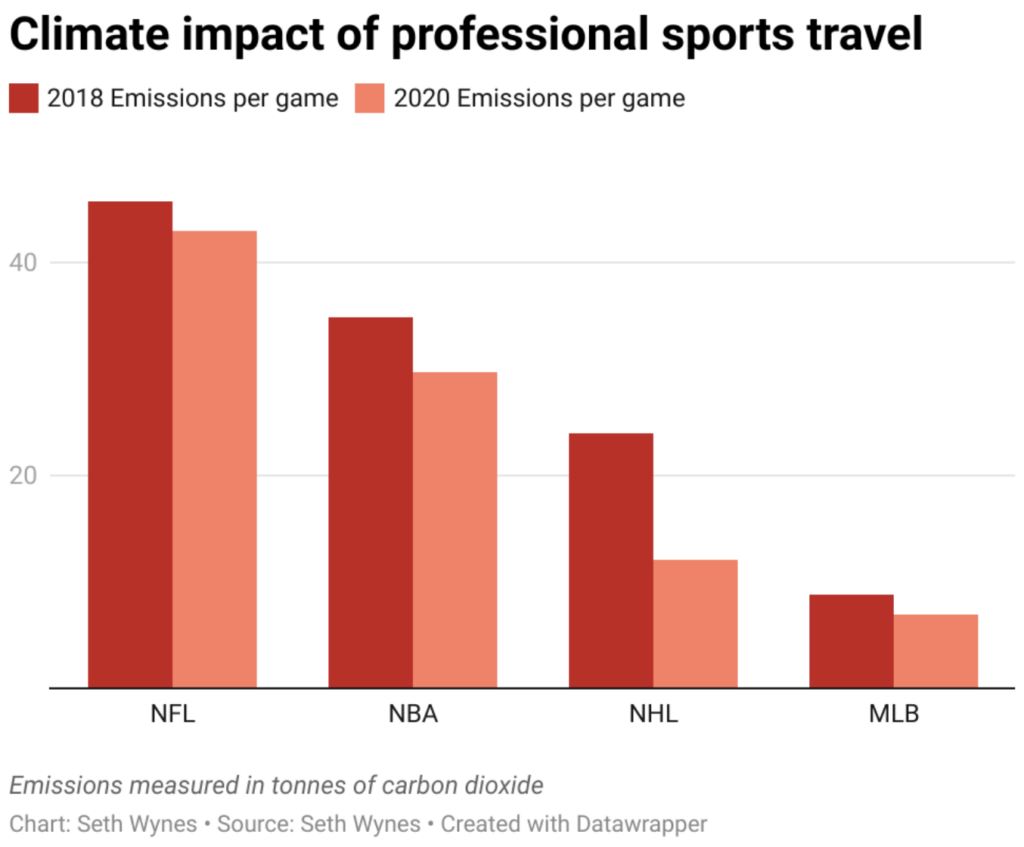 And that wasn’t the only lesson. Grouping teams by geographic region and having more games within those groupings – much as the NHL did in 2020, when Canadian teams played only other Canadian teams to avoid crossing the border – also can reduce air travel. MLB and the NFL arguably fly longer distances than necessary because they use historical groupings that aren’t geographically organized; perhaps they could take a page from the NBA and NHL, which are divided into Eastern and Western Conferences and feature more intra-conference games. Fans crave variety, so having, say, teams from California mostly play other teams from the same state likely wouldn’t work. But leagues could at least make sure that California teams play one another much more frequently than they play New York teams.

Moreover, domestic flights aren’t even the longest journeys taken by teams in the big four leagues. In an effort to expand their consumer base, all have introduced overseas games. Cutting those games and replacing them with exhibition matches in North American cities would have slashed the NFL’s carbon footprint from air travel by almost 8 percent in 2018. Domestic fans probably wouldn’t mind if leagues did this, though owners and executives might balk at the financial consequences.

In addition to being good for the planet, making these sorts of scheduling changes permanent would be helpful for player health and performance. Consider a common stretch of games played by the Los Angeles Lakers during the current NBA season. Last year, they played in New York on Nov. 23, then flew the next day to Indiana for a game. They flew home on Nov. 25 – ostensibly getting a day off – and played again on Nov. 26. That’s three games in four days, traveling coast to coast. Such trips are hard on players’ bodies, and they ultimately result in higher risk of injury and often worse performance. Perhaps it’s not a coincidence that even though the NBA has mostly done away with COVID-19 scheduling precautions during the 2021-22 season, the league has kept a few baseball-style series.

Admittedly, the quantities of emissions produced by the four major leagues are relatively small on a global scale. The NBA produced about 48,000 metric tons of carbon dioxide from air travel in 2018 – about as much as 20,000 mid-size vehicles driving an average number of miles for a year. It’s not much when compared to something like a coal plant, but considering that it comes from only a few hundred players and staff, it’s a huge amount per person.

That matters. Setting a good example matters, too. Today, players and teams with huge followings are signaling that it is OK to produce unnecessary climate pollution in a planetary emergency by sticking to the historical status quo. It would be helpful if leagues could send the opposite message by taking meaningful steps to visibly reduce their carbon footprint. Organizations around the world have made strides, most notably in European football, but American leagues have yet to make a major investment in decarbonization.

If professional leagues showed some leadership, perhaps other sports organizations could follow suit. The National Collegiate Athletic Association could open a bidding process for March Madness basketball tournament hosting rights and give preference to cities with plans to cut back on emissions, or the NCAA could host each tournament at a single city as it did in 2021. Tournament and league organizers could refuse corporate sponsorships from oil companies, airlines, and car manufacturers. Colleges could choose to play tournaments at central locations rather than on the coasts (or in Hawaii). Teams playing games in large stadiums or arenas could work with their cities to encourage green travel to their stadiums. These ideas don’t just apply to colleges and the pros: parents of teenage sports players shouldn’t need to travel across the country for games and tournaments.

For good or for ill, professional athletes are role models, and their leagues are leaders in the business community. In March 2020, many people realized the severity of the pandemic when the NHL and NBA paused their regular seasons. The pauses sent a message that we could no longer live as if everything was normal. Professional sports can do the same for the climate emergency, and they could make the changes right away.

Tue Apr 12 , 2022
The role of computers in daily life and the economy grows yearly, and that trend is only expected to continue for the foreseeable future. Those who learn and master computer science (CS) skills are widely expected to enjoy increased employment opportunities and more flexibility in their futures, though the U.S. […] 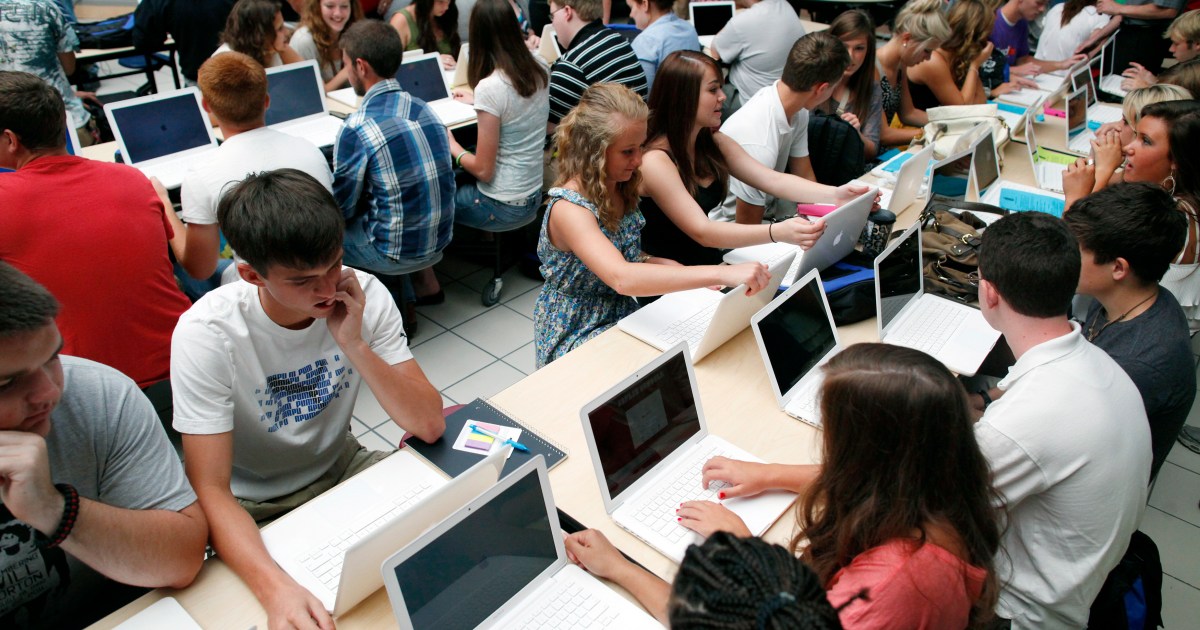