In 2011, when Yasmani Grandal met Heather — the woman who would become his wife — he told her he worked in construction. In reality, Grandal at that time was a top minor-league baseball prospect on his way to the majors after starring at Miami Springs High and the University […]

In 2011, when Yasmani Grandal met Heather — the woman who would become his wife — he told her he worked in construction.

In reality, Grandal at that time was a top minor-league baseball prospect on his way to the majors after starring at Miami Springs High and the University of Miami.

Grandal and Heather had been dating for one year — in Arizona, where she’s from and where he was playing Triple A baseball — before he finally told her about his actual career.

“One of the biggest things about ‘Yas’ is how humble he is,” Heather told the Herald. “He doesn’t boast or brag. He came to the U.S. from Cuba when he was 10 years old, and he and his family had nothing.

“He wouldn’t be in the majors today if people hadn’t helped him, and that’s the foundation for who he is and why he helps others. He wants kids to have a fighting chance in life.”

Grandal, a two-time All-Star catcher who now plays for the Chicago White Sox, has given his time and money to a lot of causes, Heather said, and he doesn’t do it to seek publicity.

Carlos Marti, the coach of the Miami-based Florida Legends travel team for players age 18 and under, recently received a $25,000 donation from Grandal.

That money, Marti said, financed a trip to Joplin, Missouri, where the Legends on Sunday qualified for the 12-team Connie Mack World Series, which will be held July 23-31 in Farmington, New Mexico.

“We’re extremely grateful to Yas,” Marti said. “He didn’t even play for the Legends, but he hasn’t forgotten his roots in Miami.”

Indeed, Grandal played for other youth-league teams like the Miami Stings, Miami Maniacs and Hialeah Heat.

“His parents [Maria and Eliaser Grandal] still have those jerseys and pictures,” Heather said.

In other words, those early days in a player’s career still carry impact

For the Legends, this will be their 10th trip to the Connie Mack World Series and their fourth in a row. And although they have never won the Mack title, 19 former Legends players have made it to the major leagues, a list that includes Manny Machado, Anthony Rizzo, Albert Almora, Zack Collins, Andrew Suarez, Aramis Garcia, Peter O’Brien and Luke Jackson.

Yet for all those stars, Grandal’s donation is the biggest one ever received by the Legends from a baseball player.

That charitable spirit is typical Grandal, according to his agent, Michael Maulini.

“Once every homestand in Chicago, Yas rents a suite and donates it to a low-income family so they can watch the White Sox in style,” Maulini said. “Yas has always given back to the community. He just never let it become known publicly. That’s not his character.”

Heather said she and Maulini were finally able to convince Grandal — who was not available to speak to the Herald for this story due to his busy baseball schedule — that it is OK to take an occasional bow.

Among the causes Grandal supports is autism, working with a group called Arizona Helping Hands. Heather said Grandal loves visiting with autistic kids, and the feeling is mutual.

Meanwhile, Adrian Morales, who went on to win two College World Series titles as South Carolina’s starting third baseman, is now the head coach at Miami-Dade College. But in high school, he and Grandal were teammates at Miami Springs.

“Yas donates catching and other gear to us at MDC and to about 10 to 15 Miami high schools,” Morales said. “Even though he doesn’t play for the Marlins, he is still active in the Miami community.

“He now lives in Arizona and speaks with a heavy American accent. But, other than that, he hasn’t changed. He’s still that kid from Hialeah.”

Mon Jul 12 , 2021
E-scooter operator Voi has launched the world’s first large scale pilot of computer vision on e-scooters. AI technology installed on the e-scooter can detect when it leaves the road and rides on a pavement, or when the vehicle is parked incorrectly. Voi is working with Irish micromobility start-up Luna, whose technology […] 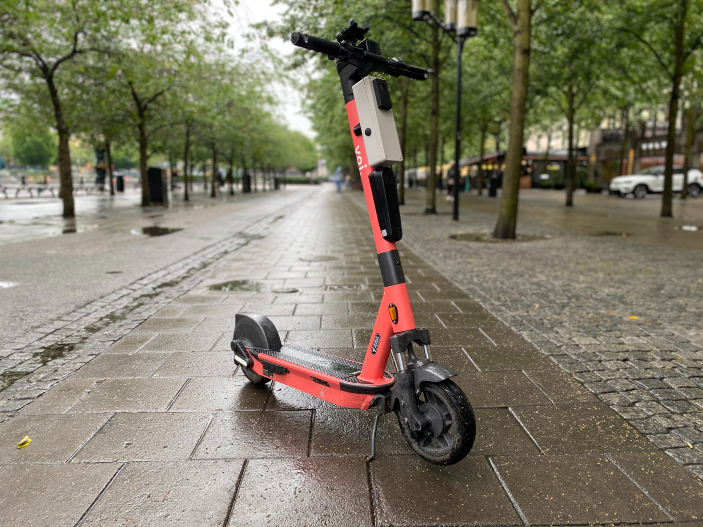