When it comes to teaching finances, United Community Bank believes it’s best to educate early. To that end, the bank created its Junior Board of Directors in 2005 to teach financial literacy and leadership for 12th graders. The program started in Georgia, but when the bank moved its headquarters to […]

To that end, the bank created its Junior Board of Directors in 2005 to teach financial literacy and leadership for 12th graders. The program started in Georgia, but when the bank moved its headquarters to Greenville, the company wanted to continue the program. This year, the bank partnered with Legacy Early College, a Greenville charter school.

The program works with students each month who were paired with the bank’s operating council in a mentorship role. The students learn about banking, careers and personal finance. This year, company organizers hope to offer a tour of the bank’s main branch and a trip to the Federal Reserve in Atlanta.

“We’ve invested a significant amount of money in this,” said Moryah Jackson, director of community development and engagement for the 70-year-old bank. Students get an in-depth look at how banks and the economy work. While the bank has considered offering internships, the program right now focuses on job shadowing and mentorship.

Melinda Davis Lux, executive vice president and general counsel for United Community Bank, is one of those mentors.

“We want the executive team to lead by example,” she said. “We wanted to know how our team could contribute in a way that’s meaningful to us.”

“I’m positive we’re getting as much out of it as the scholars,” Lux said.

There are no grades; this is a leadership development opportunity. A few current students in the program are interested in marketing and running their own businesses. Drummond said the program has dramatically increased scholars’ interests in business and finance; what they’ve learned is also affecting how the students select colleges — and prepare with a mindset of financial literacy.

“The scholars have been extremely excited to meet and learn from experts in the field that are positive representations from their communities,” Drummond said.

Jonathan Luines, a senior at Legacy, said the program increased his understanding of banking and financial literacy which, in turn, reinforced his goal of staying debt-free while pursuing his undergraduate degree.

“I’m positive we’re getting as much out of it as the scholars.” — Melinda Davis Lux, executive vice president and general counsel for United Community Bank

“It just opened my eyes up,” Luines said. When he graduates this year, he’ll have both an associates degree and a full ride to Furman University.

His mentor was United Community Bank chairman and CEO H. Lynn Harton, who taught him the importance of always doing a bit more than asked.

“Ninety-five percent of people are just doing what they’re assigned to do,” Luines said.

How students are selected

The scholars selected for the program come from “career clusters” in business management and administration, finance, information technology and marketing, Jackson said.

The program has certainly inspired students in the past — at least 1,000 students have gone through the program over the past 16 years.

“We’re encouraging them to see how business plays a role in their community,” Jackson said.

Mon Feb 14 , 2022
Missouri state Sen. Eric Burlison backs the bill that presumes ‘reasonableness’ in self-defense. Under current law, the burden of proof is on the defendant to show actions were reasonable. Supporters say the bill fixes a weakness. Opponents say the current law ‘works very well.’ A Missouri bill that prosecutors and […] 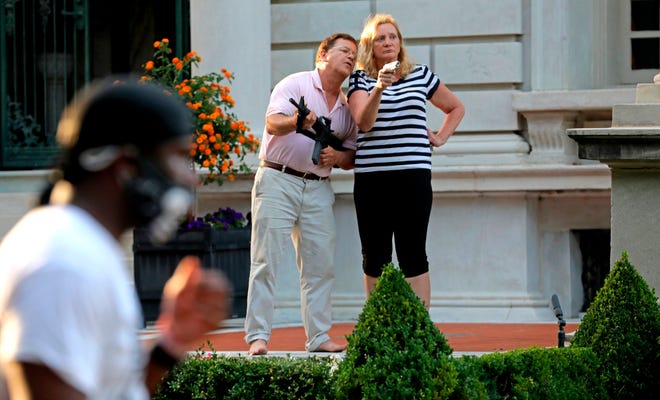