Winter weekends make me think of families who are participating in tournaments, like we did for many years. When we first started traveling to competitions, I didn’t know what my role would be, other than supporting and cheering for the players. I soon learned that there were many things I […]

Winter weekends make me think of families who are participating in tournaments, like we did for many years.

When we first started traveling to competitions, I didn’t know what my role would be, other than supporting and cheering for the players. I soon learned that there were many things I could do to enhance the experience.

We grew close to other families in our club as we enjoyed watching the games together.

However, I quickly learned that it was not all fun and games for some spectators.

In club volleyball tournaments, four teams typically are assigned to a court. Two teams play. One team is off. The fourth team works.

Jobs for the working team include line judging, where the players watch lines to see if a ball is in or out. Players keep the record book and keep the score with a flip chart of numbers.

These jobs help players gain a greater understanding of the game.

Don’t miss: Want to know about local state parks? There’s a guide for that

More Lisa: If this cooler could talk, what a story it would tell

Parents can become upset at working teams for line calls that are questionable or scorekeepers who are behind. Competitive instincts take over on the sidelines and parents yell at the working team’s players.

The first time I experienced this, I was so uncomfortable. In what other situation would it be considered OK for a grown man to yell at a teenage girl? Maybe “Fire! Get out of the building!”

I wanted to be far away from other teams’ parents to avoid potential awkwardness.

As the years progressed, though, I started taking a different approach. At times I would sit beside a parent from an opposing team and ask, “Do you have a daughter on the team?”

We chatted beforehand. I remarked when the player did well during the game. The conversation built a sense of community. We were all there for the same purpose, so why not make it pleasant ?

Carrying that approach into the college playing experience, I tried to make opposing teams feel welcome when they came to play us. Once I noticed a man wandering around before a game, confused. I asked if he needed help finding the gym and pointed him in the right direction.

“Do you have a daughter on the team?” I asked, not realizing that he was too young to have a college-age daughter.

He smirked and said, “No,” and turned and walked away.

Later, during warmups, I learned why he had that reaction. He was one of the coaches for the opposing team. Oops. I guess I should have known who he was.

I was just trying to be helpful, and I ended up enjoying the game with my family and friends anyway.

After all, it is a game, and it is supposed to be fun, especially for the players.

Lisa Tedrick Prejean writes a weekly column for The Herald-Mail. Send an email to her at [email protected] Follow her on Twitter @Lisa_Prejean.

This article originally appeared on The Herald-Mail: Travel sports parents are more than spectators

Where corporate America’s old phones and computers go to die

Sun Jan 30 , 2022
CyberCrunch is totally bent on destruction. Its two plants, in Aston and out west in Greensburg, Pa., are places where familiar electronics from Philadelphia’s biggest employers go to die. More precisely, to be shredded into high-tech confetti that data thieves can’t pillage, then sold to recyclers. The more digitized and […] 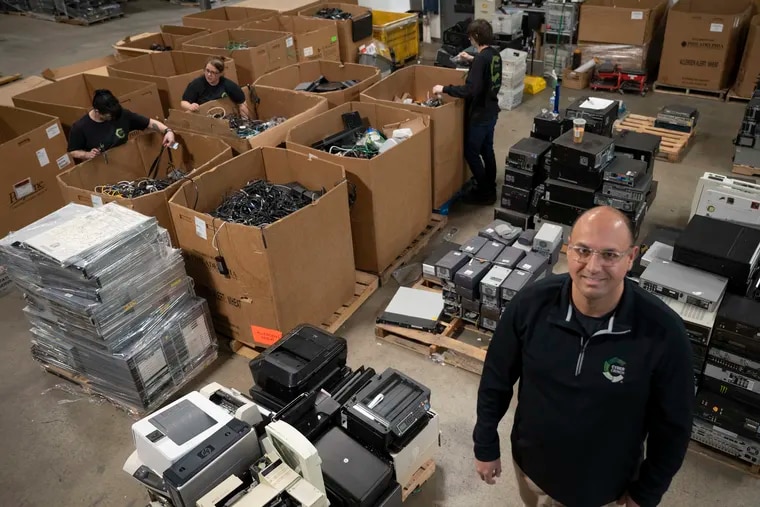