At the center of the extreme Texas law that bans nearly all abortion care in the second largest state in the US lies a novel legal provision that allows any private citizen to act as vigilantes and sue an abortion provider or anyone who “aids or abets” the procedure. While a federal judge temporarily blocked Senate Bill 8 on Wednesday, after 36 days in effect, the fifth circuit court of appeals temporarily restored the law late Friday.

In a lawsuit against the measure, the US Department of Justice recently called Senate Bill 8 an “unprecedented scheme” designed with the specific objective of evading judicial review of its unconstitutionality. But who crafted this dangerous legal strategy?

The state’s largest anti-abortion group, Texas Right to Life, an influential organization that heavily lobbied for SB8, says it was a “team effort” from within the state that included players like the Republican state senator Bryan Hughes. But a less obvious figure was also working behind the scenes: the organization confirmed that the former Texas solicitor general Jonathan F Mitchell was “instrumental” in crafting the law’s legal provision.

Dubbed a “brilliant legal mind” by a lawyer who worked with him in an anti-union case, Mitchell, a 45-year-old private attorney with ties to the conservative Federalist Society and Heritage Foundation, has a long history of defending culture war and religious-right legal challenges, including abortion care, anti-LGBTQ rights, anti-union and anti-affirmative action lawsuits.

Based on court documents, legal experts and his own writings, Mitchell promotes a controversial and some say “dangerous” and “radical” legal strategy that seeks to thwart judicial review and grant Republican state lawmakers maximum power. With Roe v Wade in the crosshairs – the US supreme court is poised to hear a Mississippi case that challenges a 15-week ban this term – abortion rights appears to be an ideal testing ground to promote his legal ideology.

“It is clear that Mitchell and allies want to ban abortion outright through their own legal scheme,” says Amanda Williams, executive director of the Lilith Fund, which is among the groups fighting SB8.

A 2001 graduate of University of Chicago Law School, Mitchell has a formidable résumé that includes a clerkship with the late Justice Antonin Scalia, a visiting professorship at Stanford Law School, time as an adjunct professor at the University of Texas School of Law, and a role with the justice department under George W Bush. A figure largely out of the public eye, Mitchell declined to be interviewed for this story.

In 2016, Mitchell set his sights on landing a federal job under the Trump administration. Mitchell served as a volunteer attorney for the Trump presidential transition team, and the former president sought to nominate him to chair the Administrative Conference of the United States in 2017. However, following concerns about impartiality from the Democratic senator Sheldon Whitehouse, he failed to secure confirmation.

Mitchell is no stranger to defending Texas abortion laws and the state’s ideologically driven reproductive health policies. As solicitor general from 2010 to 2015 he helped uphold an onerous 24-hour pre-abortion sonogram law; a decision to kick 50,000 low-income Planned Parenthood patients from a Medicaid program; and an omnibus 2013 Texas abortion law that in effect shuttered half the state’s clinics before being struck down by the US supreme court in 2016.

He continued to defend anti-abortion views after his term: in 2019, he represented a former Austin council member who sued the city for investing funds in logistical care for abortion and east Texas activists who wished to deem abortion fund groups “criminal”.

In recent years, Mitchell has spent considerable time defending the “sanctuary for the unborn” ordinance – the blueprint for SB8. With no exception for rape or incest, the municipal ordinances allow any “surviving relative of the aborted unborn child” to sue abortion providers or someone who “aids or abets” abortion in civil court. Since 2019, the movement has grown to 37 towns, including cities in Ohio and Nebraska. While largely symbolic (most of the towns had no abortion clinics to begin with), in June the movement successfully halted abortion services in Lubbock, Texas, the largest city to pass the ordinance.

Mitchell also represents Mark Lee Dickson – leader of the “sanctuary for the unborn” movement – in both a defamation case from abortion support groups fighting the ordinances and in the larger legal challenge filed by abortion providers against SB8. He also represented, without cost to the taxpayer, the first seven east Texas towns to pass the ordinance against suit from abortion fund groups. In a phone interview with the Guardian, Dickson called Mitchell a “good guy” who did an “excellent job”.

But Mitchell’s legal battles aren’t confined to reproductive rights. A legal crusader against LGBTQ protections, Mitchell defended businesses who wished to fire employees based on sexual orientation and fought against local protections for LGBTQ residents in Texas.

Mitchell is also the “driving force” behind anti-union litigation, filing 21 class-action lawsuits against unions over two years in multiple states. And he represents anti-affirmative action suits against the Harvard and NYU Law Reviews that allege bias against white men. The publications engaged in “race and sex discrimination” by giving preference to articles written by women or racial minorities, the suit reads.

The answer to who has funded Mitchell’s legal work has been somewhat elusive. His funds appear to come in part from rightwing and conservative firms including the Thomas More Society; Texas Alliance for Life; Texas Values; and the conservative thinktank the Hoover Institute, according to financial records that account for income from 2015 to 2017. In 2019, the powerful conservative religious law group Alliance Defending Freedom began paying Mitchell’s law firm more than $36,000 for services listed as “religious freedom”, the Guardian previously reported.

Mitchell’s work on defending Texas abortion laws offers a glimpse into his legal ideology: in those cases he argued that because Texas has never officially repealed its pre-Roe v Wade statutes that outlaw abortion, clients should be able to consider the laws largely enforceable. “The supreme court’s judgment in [Roe] did not cancel or formally revoke the Texas abortion statutes, and the judiciary has no power to erase a statute that it believes to be unconstitutional,” he writes.

This falls in line with Mitchell’s general belief that the judiciary is afforded an all too powerful – and misunderstood – role in the public eye. He critiques what he believes is the widespread public misconception of the federal court’s powers, especially when the court “blocks” a law. “The judicially disapproved statute continues to exist as a law until it is repealed by the legislature that enacted it, even as it goes unenforced” by the judiciary or the executive branch.

The latest Texas abortion ban, SB8, can be seen as a “direct reflection” of Mitchell’s legal philosophy, says Mary Ziegler, a law professor at Florida State University and the author of Abortion and the Law in America: Roe v Wade to the Present. For instance, using the term “aiding or abetting,” which is typically criminal law language, rather than civil, signals that the court’s decision in Roe didn’t ever invalidate Texas’s criminal ban on abortion, which remains on the books – it simply meant they couldn’t enforce it.

Mitchell seeks to encourage legislators to create laws that could be better shielded from court challenges. In his 2018 legal essay, the Writ of Erasure Fallacy, he writes that legislators can “provide for private enforcement of the statute authorizing civil lawsuits […] These mechanisms are especially powerful because they enable private litigants to enforce a statute even after a federal district court has enjoined the executive from enforcing it.”

In its lawsuit against Texas to stop SB8, the US DoJ cites Mitchell’s essay as proof that the abortion law’s architect intended to stymie judicial review.

Steve Vladeck, a University of Texas Law School professor who specializes in federal courts, says Mitchell’s legal views are “deeply nihilistic”. While his attempt to elucidate the judiciary’s role is helpful, he “exploits” the analysis to make constitutional rights “dependent on the whims” of state legislatures.

“It empowers states to deprive their citizens of the most clearly established and unassailable rights,” says Vladeck. “It’s incredibly dangerous – if our constitutional rights are only as good as state legislatures choose to allow them to be, then they are not worth anything. It promotes the tyranny of the majority.”

Mitchell’s legal idea can be applied to anything from “campaign finance law, to a gun-control measure … to an abortion regulation,” he writes. While states pass increasingly onerous abortion restrictions and the US supreme court appears poised to chip away at Roe this term, abortion rights are tenuous and ripe for testing.

And Texas could be considered a perfect breeding ground: the Republican-dominated Texas legislature, which easily passed some of the most draconian abortion laws in the US, finds an ally in the largely conservative fifth circuit court of appeals and a supreme court now stacked with anti-abortion justices.

“Mitchell uses his intellectual ability to push for fairly significant and radical changes in legal doctrine – and I can’t see how it is not ideologically motivated,” says Vladeck. “Even if you feel so justly in a cause, how do you reconcile the fact you are inflicting so much harm on so many?”

Ziegler is familiar with Mitchell’s legal ideology. As a historian of the abortion rights movement, she considers him a figure who “interestingly bridges the gap between the old school legal elite and populist elements dominating the anti-abortion movement”. He deviates from the anti-abortion movement’s recent affinity for the judicial system, she says, making his approach different.

“SB8 is a radical expansion of abortion law,” she says. “In the past, states have had concern about cost and consequences when they lose abortion court battles. Now, Texas has a ‘have your cake and eat it too’ approach with this law.”

That legal scheme appears poised to spread across the US: considering the success of the Texas-based approach, GOP officials in 11 other states including Arkansas, Mississippi, Indiana and North Dakota have expressed interest in adopting similar measures. A Florida Republican lawmaker recently introduced an SB8-like abortion ban that would place enforcement in the hands of private citizens.

“We are horrified to see anti-choice politicians in Florida following in Texas’s footsteps, and there’s no question that lawmakers hostile to reproductive freedom in other states will do the same,” said Adrienne Kimmell, acting president of Naral Pro-Choice America. “The harm of these draconian attacks cannot be overstated and they most acutely impact those who already face the greatest barriers to accessing care.” 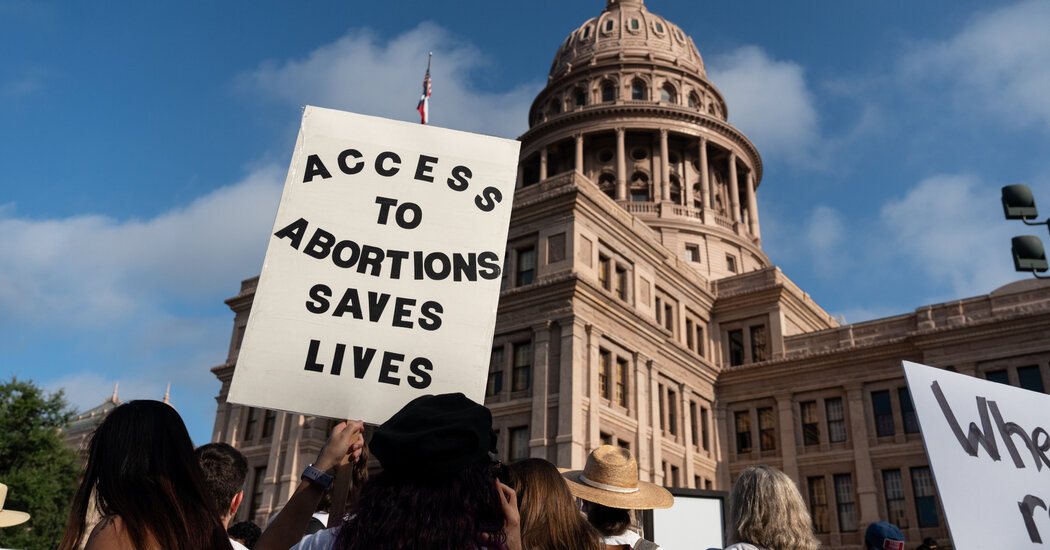