WASHINGTON — A federal judge on Wednesday granted the Justice Department’s request to halt enforcement of the recently passed Texas law that bans nearly all abortions in the state while the legal battle over the statute makes its way through the federal courts. In his 113-page ruling, Robert L. Pitman, […]

WASHINGTON — A federal judge on Wednesday granted the Justice Department’s request to halt enforcement of the recently passed Texas law that bans nearly all abortions in the state while the legal battle over the statute makes its way through the federal courts.

In his 113-page ruling, Robert L. Pitman, a Federal District Court judge in Austin, sided with the Biden administration, which had sued to halt a law that has changed the landscape of the abortion fight and further fueled the national debate over whether abortion will remain legal across the country.

Judge Pitman used sharp language to criticize the law, known as Senate Bill 8, which was drafted to make it difficult to challenge in court by delegating enforcement to private individuals, who can sue anyone who performs abortions or “aids and abets” them.

“From the moment S.B. 8 went into effect, women have been unlawfully prevented from exercising control over their own lives in ways that are protected by the Constitution,” he wrote in his opinion.

“This court will not sanction one more day of this offensive deprivation of such an important right,” he added.

It is not yet clear what effect his decision to pause enforcement of the law will have on women in Texas, who have scrambled to find abortion providers in other parts of the country.

The law’s novel legal approach extends to what happens if it is temporarily suspended: Clinics can be sued retroactively for any abortions they provide while it is blocked. That means penalties could be imposed when the suspension is lifted for abortions that happened while it was in place, keeping clinics in a fraught legal environment.

“S.B. 8 says if an injunction is dismissed, you are still accountable for abortions you did while you were protected by that injunction,” said John Seago, the legislative director for the anti-abortion group Texas Right to Life.

So even though Judge Pitman ruled in favor of the clinics, they expressed hesitation on Wednesday night about when they might resume full activity.

Nancy Northup, the president and chief executive of the Center for Reproductive Rights, said in a statement that clinics her group represents “hope to resume full abortion services as soon as they are able, even though the threat of being sued retroactively will not be completely gone until S.B. 8 is struck down for good.”

Whole Woman’s Health, a group that operates four clinics in the state, said in a statement that it was “making plans to resume abortion care up to 18 weeks as soon as possible.”

A spokeswoman said she did not know precisely when that would be.

Texas, for its part, notified the U.S. Court of Appeals for the Fifth Circuit on Wednesday night that it would appeal the ruling. The court is one of the most conservative in the country. Mr. Seago estimated that decision could come in as soon as a few days.

Judge Pitman enjoined Texas or anyone acting on its behalf from enforcing the law. He also said state court judges and state court clerks who had the power to enforce or administer the law were not to do so.

Mr. Seago said that his organization expected Judge Pitman to rule in favor of the clinics, but that his decision to enjoin judges and clerks was a surprise.

“We expected him to look for a way to do this, but we are astonished he created a way to enjoin state judges and court staff,” Mr. Seago said.

In Washington, Attorney General Merrick B. Garland hailed the ruling as “a victory for women in Texas and for the rule of law.”

“It is the foremost responsibility of the Department of Justice to defend the Constitution,” he said in a statement on Wednesday night. “We will continue to protect constitutional rights against all who would seek to undermine them.”

The Supreme Court’s decision. In a late-night ruling on Sept. 1, the Supreme Court refused to block the law less than a day after it took effect and became the most restrictive abortion measure in the nation. The vote was 5 to 4, with Chief Justice John G. Roberts Jr. joining the court’s three liberal members in dissent.

The legal battle continues. On Oct. 6, a federal judge in Austin granted the Justice Department’s request to halt enforcement of the law while the legal battle over the statute makes its way through the federal courts. Texas notified the U.S. Court of Appeals for the Fifth Circuit that it would appeal the ruling.

The Texas law bans abortions once cardiac activity can be detected in an embryo, usually after about six weeks of pregnancy. Health care experts say women may not even know they are pregnant during that time frame. And the law makes no exception for pregnancies that are the result of rape or incest.

The Justice Department sued Texas last month, after the Supreme Court declined to block the law in a 5-to-4 decision that did not rule on whether the measure and its unorthodox enforcement mechanism are constitutional. The department then filed an emergency motion requesting an order that would prevent Texas from enforcing Senate Bill 8 while its lawsuit moves through the courts.

At the center of the legal debate over the law is its use of private citizens, rather than the state’s executive branch, to enforce the restrictions. Plaintiffs are encouraged to file suit because they recover legal fees, as well as $10,000 if they win.

Judge Pitman said that through its abortion law, Texas has pursued “an unprecedented and aggressive scheme to deprive its citizens of a significant and well-established constitutional right.”

At a hearing last week to determine whether Judge Pitman would halt enforcement, William T. Thompson, a lawyer for the State of Texas, argued that the Justice Department did not have grounds to argue the case because the law did not harm the federal government. Texas argued that civil suits brought under the new law and heard in Texas state courts were the “proper cases for deciding the constitutionality of the challenged statute.” Few such suits have been filed so far.

Opponents and supporters of the Texas law recognize that it is an enormous shift in the nation’s battle over abortion, which has long rested on whether the Supreme Court will overturn Roe. The Supreme Court is soon scheduled to hear another case, from Mississippi, on a state law restricting access to abortion after 15 weeks.

The Texas law essentially allows a state to all but ban abortions before a legal test of that watershed case. If the law is not stopped by the courts, other Republican-led state legislatures could use it as a blueprint for their own restrictions.

There is no guarantee that the Justice Department’s civil suit against Texas will make its way to the Supreme Court. Should the U.S. Court of Appeals for the Fifth Circuit rule that Senate Bill 8 is constitutional, the Supreme Court, with a 6-to-3 conservative majority, could decline to hear the case.

On Wednesday night, clinics expressed uncertainty about the future.

“While we are relieved that a court has finally blocked this unconstitutional law, today’s court order is only temporary,” said Ms. Northup, of the Center for Reproductive Rights. “This is not the end.”

Fri Oct 8 , 2021
“You really can change the world with food as your vehicle,” he said in an interview with the Globe. Evans, who was hired earlier this year, did not come from a culinary arts background. Previously, he was the chair of the State University of New York (SUNY) Cobleskill agricultural and […] 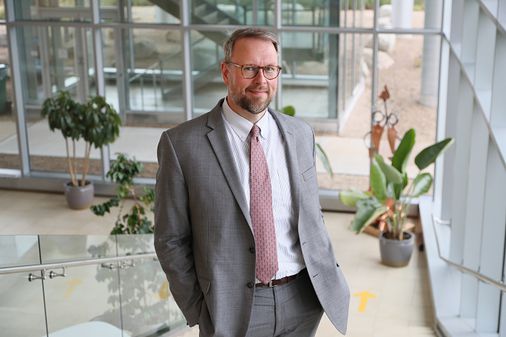