Target Corp. plans to lower the number of outside law firms it uses and will examine efficiency, diversity, and risk tolerance in deciding which ones to cut, said Don Liu, the company’s chief legal and risk officer. The retailer has begun multi-rounds of evaluating firms on their understanding of Target […]

plans to lower the number of outside law firms it uses and will examine efficiency, diversity, and risk tolerance in deciding which ones to cut, said Don Liu, the company’s chief legal and risk officer.

The retailer has begun multi-rounds of evaluating firms on their understanding of Target values and ability to help navigate legal “murky waters,” among other characteristics, Liu said in an interview. Eventually, he said he hopes to have deeper relationships with the pared-down panel of firms.

“A lot of lawyers tend to believe that the most conservative legal position is the best position—I don’t believe in that,” Liu said. “Not doing something to prevent yourself from ever violating the law is not always a smart thing to do. You have to take some calculated risk, even in the face of lack of clarity.”

Liu leads the 500-person legal department for the Minneapolis-based retailer, which he joined in 2016 after nearly a decade as general counsel of Xerox Corp. Before that, he was general counsel and chief diversity officer of IKON Office Solutions and deputy chief legal officer of Aetna Inc. He began his career with law firms Simpson Thacher & Bartlett and Richards & O’Neil.

Liu said he has no particular goal in mind for lowering the number of hundreds of firms Target now uses as the company begins “an iterative process.”

“First phase is: What is the number of law firms that we think we can do without by folding it into some of the larger relationships that we have?” he said. “There will be a second and third and fourth phase, which will go deeper into which firms are deserving of more work from us.”

He said he favors lawyers that can speak bluntly, transparently, and without legalese.

As Liu and his team evaluate and trim Target’s outside counsel panel, Liu said they’ll continue to carefully track their law firms’ billed hours. This can improve efficiency and reduce cost, but Liu said detailed tracking can also help improve diversity among the outside firms.

“We have a goal for diverse lawyers—associates, diverse partners, female lawyers, female partners—in terms of the percentage of hours worked that are attributable to them,” Liu said. “If they’re way up, we’ll engage.”

But diversity isn’t a one-way street, Liu said. Many companies that have outside counsel diversity requirements don’t do anything to help their firms with those goals, he said.

“It’s Target engaging with diverse lawyers, identifying talent, and then helping those talented, diverse lawyers grow to be successful partners,” Liu said. “We communicate to the law firms who we like, tell them where we think those lawyers need to grow, what gaps they have, and how we can contribute to their growth.” 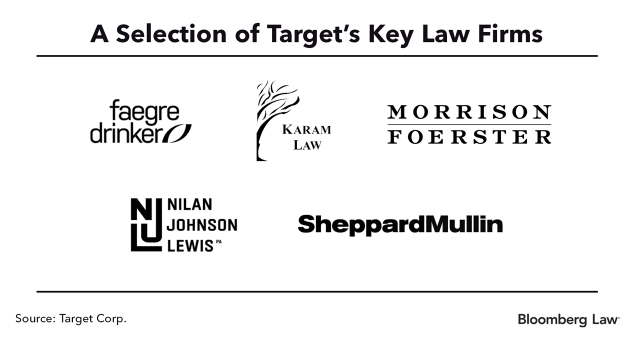 When Liu started law school at Columbia University, he said he dreamed of becoming the “Martin Luther King of the Asian American community.” Though student loans, kids, and life disrupted that plan, Liu said he maintained his passion for civil rights work throughout his career.

As anti-Asian hate crimes surged earlier this year, Liu co-founded The Alliance for Asian American Justice with the goal of providing pro bono legal services to victims of hate incidents. Out of nearly 100 firms working with The Alliance, Liu said many also do work for Target.

“I’ve had my lawyers say to me, ‘We’ve read about The Alliance,’” Liu said of his legal team at Target. “’What can we do to help? How can we personally engage in these activities?’”

As of mid-November, Liu said the group had provided more than $4 million worth of pro bono hours to victims of hate crimes around the country.

Target “has been unbelievably supportive of my own personal interests because they care about the same issues,” Liu said. “It makes my job a lot easier because I don’t have to feel guilty. I know the company will stand behind me.”