-Messenger photo by Chad ThompsonDonna Faith, front, voices her concern about traffic safety near a proposed travel center at the intersection of U.S. Highway 20 and Poplar Avenue. Faith lives near the proposed center. She shared her concerns during the Webster County Planning and Zoning meeting Tuesday night. Tony Gustafson, […]

-Messenger photo by Chad Thompson
Donna Faith, front, voices her concern about traffic safety near a proposed travel center at the intersection of U.S. Highway 20 and Poplar Avenue. Faith lives near the proposed center. She shared her concerns during the Webster County Planning and Zoning meeting Tuesday night. Tony Gustafson, district 1 engineer for the Iowa Department of Transportation, and Cody Forch, transportation team leader for McClure Engineering, look on at right.

A plan to create a travel center east of Fort Dodge near U.S. Highway 20 hit an obstacle Tuesday evening when a county government panel voted against the necessary rezoning.

The Webster County Planning and Zoning Commission voted 5-2 to recommend denying the switch from the agricultural preservation designation to a general commercial one.

The commission’s vote is a recommendation to the Board of Supervisors, which will have the final say on the matter.

Kevin Stumpf, the property owner who is seeking to develop the center, said he will ask the supervisors to rezone the property as he requested. 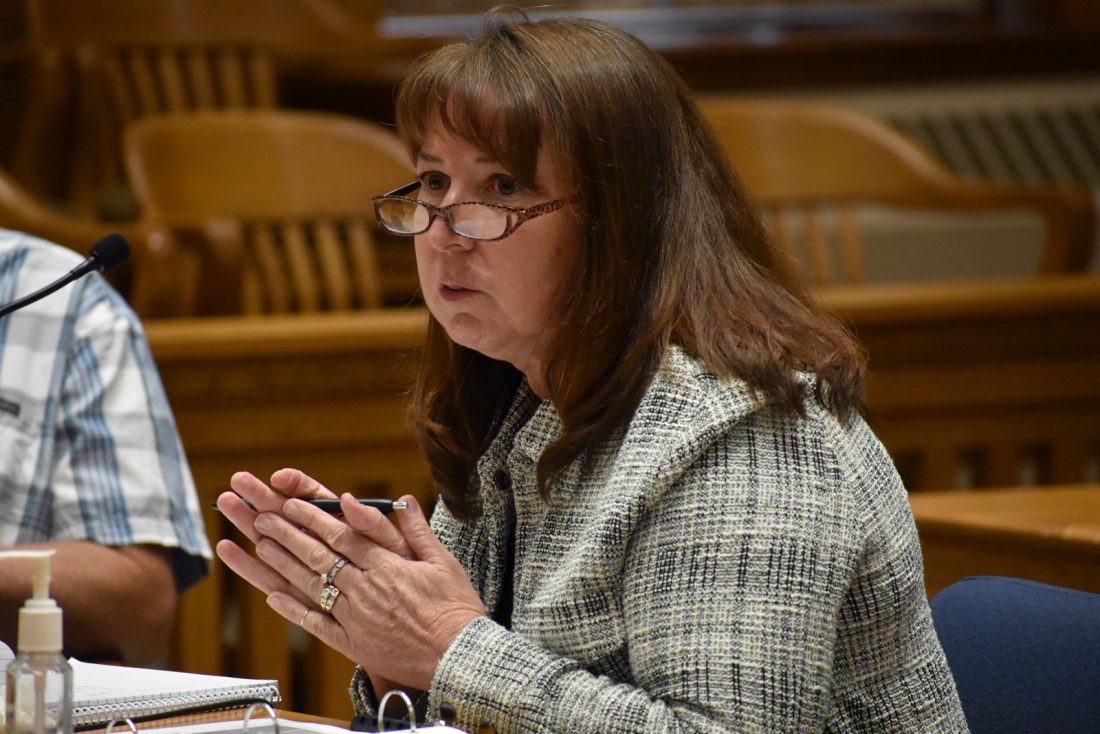 -Messenger photo by Chad Thompson
Margo Knippel, chairwoman of the Webster County Planning and Zoning Commission, speaks Tuesday night during a meeting regarding the potential development of a travel center near U.S. Highway 20 and Poplar Avenue.

He said he was really disappointed that commission members were still concerned about traffic safety even though he had McClure Engineering Co., of Fort Dodge, prepare a plan to redesign the intersection of U.S. Highway 20 and Poplar Avenue.

During Tuesday’s meeting, Tony Gustafson, district 1 engineer for the Iowa Department of Transportation, told the commission that his agency has approved the intersection plan proposed by McClure Engineering.

“We don’t have any concerns,” he said.

Stumpf has proposed building the travel center on land he owns on the northwest side of the intersection of U.S. Highway 20 and Poplar Avenue.

He envisions a 9,750-square-foot building housing a convenience store on one side and a coffee shop and restaurant on the other. Gasoline and diesel fuel pumps along with charging stations for electric vehicles would be outside. 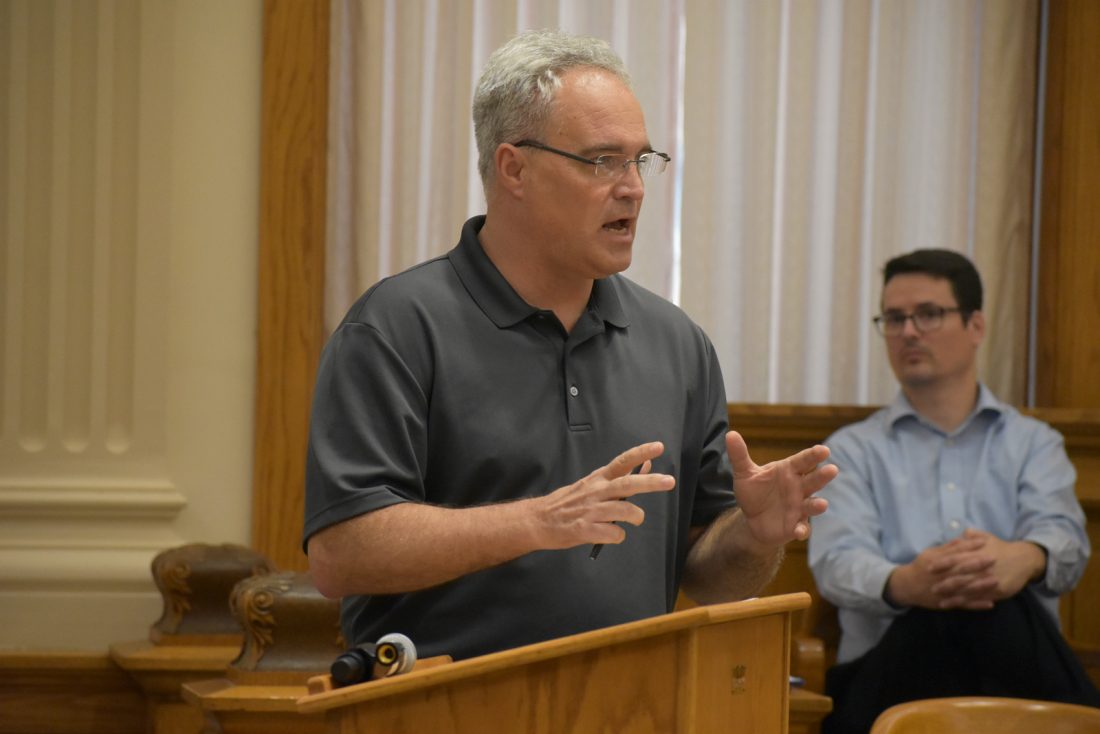 He also wants to create an enclosed dog park and a trail connection leading to the nearby Holiday Creek Nature Area.

The site would be along Poplar Avenue, about 400 feet north of U.S. Highway 20.

Stumpf has estimated that it would cost $6 million to develop the travel center.

He has asked the county to rezone 24 acres to allow its creation.

The Planning and Zoning Commission first considered the idea on April 13. At that time, it postponed any action until after the traffic study was received. 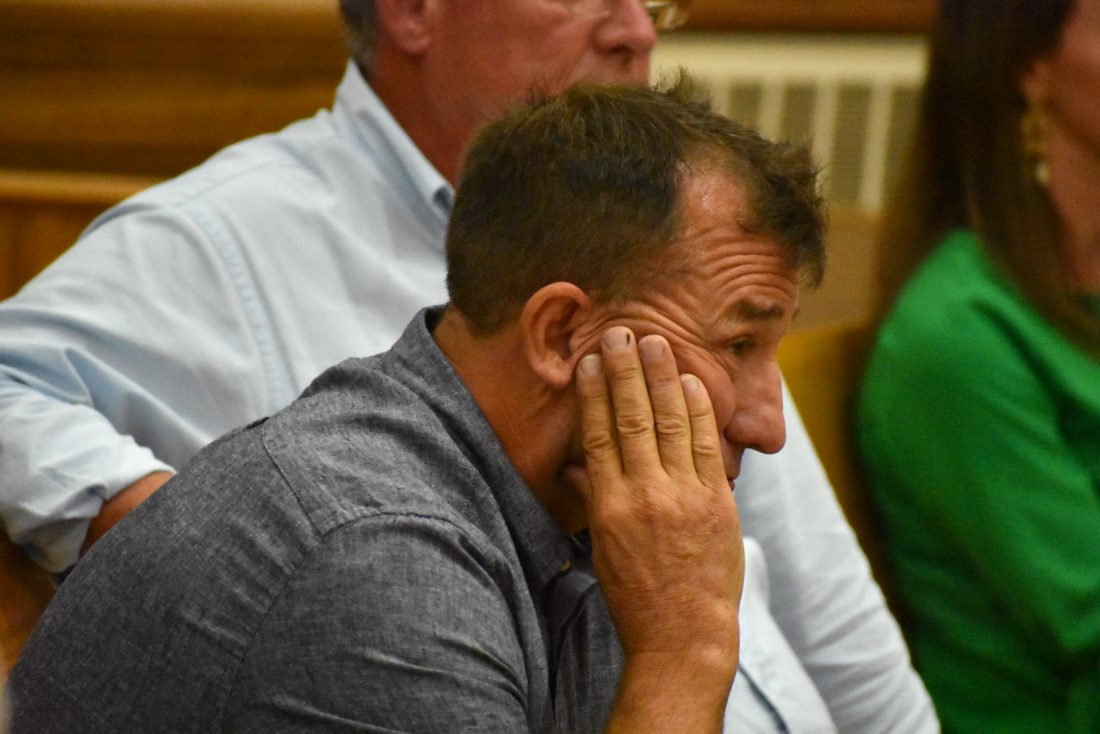 -Messenger photo by Chad Thompson
Kevin Stumpf, the developer for a proposed travel center near U.S. Highway 20 and Poplar Avenue, reacts as the Webster County Planning and Zoning Commission votes on their recommendation to the county board of supervisors. The commission voted to deny the request to rezone the property where the development is proposed.

Expecting a large crowd, county officials moved Tuesday’s meeting to the large courtroom on the third floor of the courthouse. At the beginning of the meeting commission Chairwoman Margo Knippel urged people to keep their emotions in check.

During the meeting, four people spoke against the plan, some of them coming to the podium repeatedly. They cited concerns about traffic safety at the intersection, future commercial development at the site, bright lights shining onto their property, loss of water in their wells and trash blowing onto their properties.

Commission members seemed most concerned about creating illegal spot zoning if they recommended approval of the project. They indicated that they did not want to create an island of commercial property surrounded by farmland.

“I don’t think anybody up here thinks your project is bad,” Knippel said to Stumpf.

But she said to rezone the site as requested would go against the county’s future land use and comprehensive plans.

“As a planner, I have to look at the entire county,” she said.

She added that approving spot zoning would make it appear to planners and developers that Webster County doesn’t actually have a comprehensive plan.


On the 101st anniversary of the ratification of the 19th Amendment granting women the right to vote, the YWCA of …

Wed Aug 18 , 2021
Quarterly financial reports play a vital role on Wall Street, as they help investors see how a company has performed and what might be coming down the road in the near-term. And out of all of the metrics and results to consider, earnings is one of the most important. Life […] 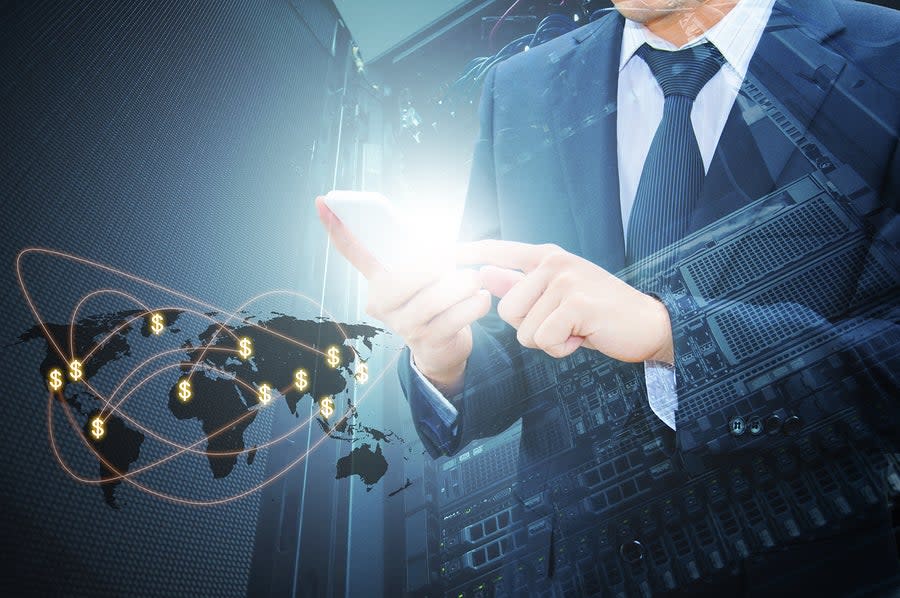