A woman and child from Brazil wait for their flight underneath a board showing roughly a dozen cancelled flights among the scheduled arrivals, at Miami International Airport, Monday, Dec. 27, 2021, in Miami. Thousands of flights worldwide were canceled or delayed on Monday, as airline staffing shortages […] 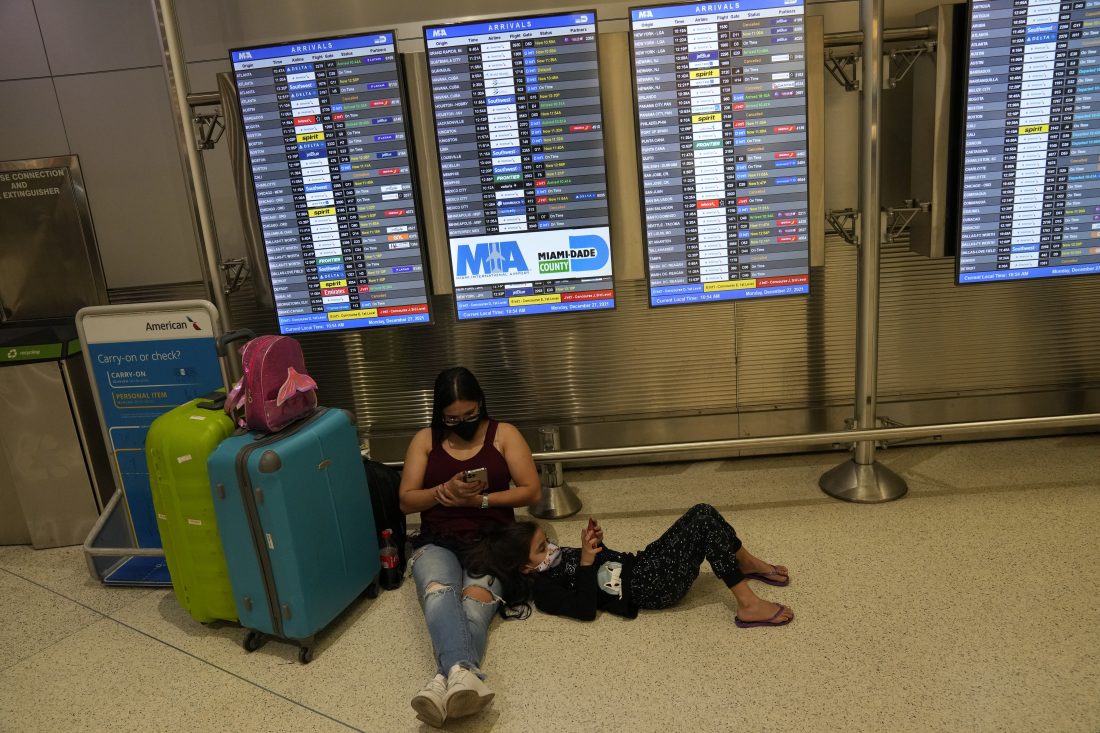 A woman and child from Brazil wait for their flight underneath a board showing roughly a dozen cancelled flights among the scheduled arrivals, at Miami International Airport, Monday, Dec. 27, 2021, in Miami. Thousands of flights worldwide were canceled or delayed on Monday, as airline staffing shortages due to the rapid spread of the omicron variant of COVID-19 continued to disrupt the busy holiday travel season. (AP Photo/Rebecca Blackwell)

NEW YORK (AP) — Flight cancellations that disrupted holiday travel, stretched into Monday as airlines called off more than 1,000 U.S. flights because crews were sick with COVID-19 during one of the year’s busiest travel periods, and storm fronts added to the havoc.

Flight delays and cancellations tied to staffing shortages have been common this year. Airlines encouraged workers to quit in 2020, when air travel collapsed, and carriers have struggled to make up ground this year, when air travel rebounded faster than almost anyone had expected.

The arrival of the omicron variant only exacerbated the problem.

“During the pandemic, we have seen experienced airline personnel leave the industry and not return across the globe,” said John Grant, senior analyst at travel industry research firm OAG. “Filling those skill gaps was already a challenge in the recovery before the latest variant.”

But airlines’ staffing levels are “irrelevant” when omicron is thrown into the mix, said Atmosphere Research Group travel industry analyst Henry Harteveldt. “We can’t blame the issues we’re seeing now on airlines not having enough employees to work. What we’re seeing happen is the employees who were available to work have come down with COVID.”

Since Friday, airlines have canceled more than 4,000 flights to, from or inside the U.S., according to FlightAware, which tracks flight cancellations.

Delta, United, JetBlue and American have blamed the coronavirus for staffing problems in the past several days. European and Australian airlines also canceled holiday-season flights because of infected staff, but weather and other factors played a role as well.

United said it canceled 115 flights Monday, out of more than 4,000 scheduled, due to crews with COVID-19. Delta expected to cancel more than 200 flights out of its schedule of over 4,100, after scrapping more than 370 on Sunday, citing the effect of COVID-19 on crews and winter weather in Minneapolis, Seattle and Salt Lake City.

SkyWest, a regional airline based in Utah, said it had more cancellations than normal during the weekend and on Monday after bad weather affected several of its hubs and many crew members were out with COVID-19.

Industry analysts said new guidance from U.S. health officials could help airlines better navigate the impact of omicron on staffing levels. The Centers for Disease Control and Prevention on Monday cut in half the recommended length of time a person should isolate after getting COVID-19 to five days.

Airlines had called on the Biden administration to shorten the quarantine period to alleviate staffing issues caused by omicron, although the union for flight attendants pushed back, saying the isolation period should remain 10 days.

Representatives for the flight attendants union, the airlines and the industry’s trade group did not immediately respond or declined to comment on the CDC change.

Cancellations have snarled holidays that were already complicated this year with the rise of the omicron variant and escalating COVID-19 cases, which caused some to change their plans at the last minute.

But many other people kept their plans.

Transportation Security Administration data shows that the number of passengers screened at TSA checkpoints so far during the holiday season went up significantly from last year — on some days double the number of fliers or even more. But the number is generally still short of 2019 levels.

The TSA has predicted that the Monday after New Year’s will be one of the busiest days of the holiday season. The CDC’s new guidelines could help airlines better navigate the New Year’s weekend rush as staffers who got infected are able to come back to work, Harteveldt said.

The U.S. government has issued new rules relating to COVID-19 and travel in recent months, requiring foreigners coming to the U.S. to be vaccinated. It also now requires a negative COVID-19 test for both U.S. citizens and foreigners within a day of flying into the country.

Dr. Anthony Fauci, the top U.S. infectious disease expert, said Monday that the nation should also seriously consider a vaccination mandate for domestic travel as another way to push people to get vaccinated.

The administration has at times considered a domestic vaccination requirement, or one requiring either vaccination or proof of negative test. Such a requirement could face legal challenges.

Are These Computer and Technology Stocks Undervalued Right Now?

Tue Dec 28 , 2021
The proven Zacks Rank system focuses on earnings estimates and estimate revisions to find winning stocks. Nevertheless, we know that our readers all have their own perspectives, so we are always looking at the latest trends in value, growth, and momentum to find strong picks. Of these, perhaps no stock […]