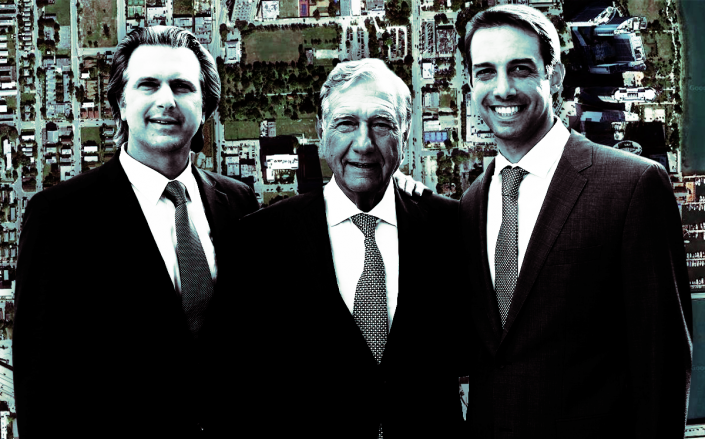 UPDATED, Dec. 3, 11:48 p.m.: The Melo Group wants to build residential high-rises with retail on a full city block in Miami’s Arts & Entertainment District, and has the property under contract for $105 million, The Real Deal has learned.

The Melo family’s development firm expects to close in mid-December on just over 3 acres between Biscayne Boulevard and Northeast Second Avenue as well as Northeast 17th Street and 17th Terrace, said Martin Melo, company principal. This will be an all-cash deal.

Martin Melo leads the company with his brother Carlos and their father Jose Luis Ferreira de Melo. The three moved from Argentina to Miami when they saw the city’s potential during a 2001 visit.

The firm’s latest purchase is a long-term investment play, as development plans are yet to be hammered out and city approvals sought. It is likely to be a project for the next real estate cycle, said Carlos Melo.

The preliminary vision is for a four-tower complex that could rise up to 60 stories with both apartments and condominiums as well as retail.

“We need to know, at the time we decide to develop, how the market is, what is possible to develop in the market, and develop what the market demands,” Carlos Melo said.

The long-term vision is in line with the Melo Group’s strategy of assembling land years ahead of construction.

The site now is home to a Burger King and a two-story mixed-use commercial building, both fronting Biscayne Boulevard, as well as a house farther west at 221 and 235 Northeast 17th Street that has been converted to commercial uses. Most of the parcels are vacant or parking lots.

The Fort Lauderdale-based selling entities are led by James Goldstein, according to records.

The project marks the Melos’ continued investment in the Arts & Entertainment District. The firm also just scored a $21.7 million refinancing for its Second Plaza apartment tower at 222 Northeast 25th Street that was completed a decade ago, according to Martin Melo.

More recently, Melo has turned its attention to downtown Miami, completing a pair of 52-story towers, called Downtown 5th, in August. The firm is set to close on a $250 million permanent loan on this project next week, Martin Melo said.

It is now building the Downtown 1st rental tower with the help of a $75 million construction loan obtained in November.

The company’s bet on the multifamily market comes amid high demand for apartments that is pushing up rents to unprecedented levels.

In the Edgewater neighborhood, just north of the Arts & Entertainment District, Melo built Aria on the Bay, a condo tower, and is now constructing Aria Reserve, a two-tower, roughly 800-unit condo development at 711 Northeast 23rd Terrace. In June, it launched sales of the first tower, with 391 units. Melo assembled the land for the project over the course of a decade.

In all, the firm has completed a total of 6,000 condos and apartments in and near Miami, with another 2,500 underway, according to a release.

Tue Dec 7 , 2021
Ever since my teens, I could be found on the weekends searching through yard sales for silk scarves, hand-tooled leather bags, and other long-forgotten treasures—the allure of finding one-of-a-kind things that couldn’t be easily replicated has always drawn me in. So, last summer, when a friend introduced me to estate […]