Turns out your parents were pretty cool.    And that goes for their parents and their grandparents too. While you may have cringed at the clothes they wore back in the day, there’s a growing audience of collectors and fashion aficionados who appreciate the clothes that once graced a hanger […] 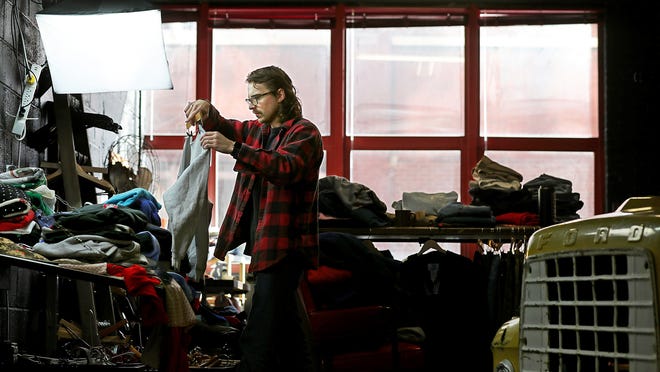 Turns out your parents were pretty cool.

And that goes for their parents and their grandparents too.

While you may have cringed at the clothes they wore back in the day, there’s a growing audience of collectors and fashion aficionados who appreciate the clothes that once graced a hanger at Kmart or a rack for those fancy pants who shopped at Polsky’s Department Store.

Aaron Gascon is one of those vintage clothing nuts.

What started out as a hobby scrounging around flea markets, garage sales, estate sales and thrift stores for unusual, well-loved clothing and other oddities has turned into a full-time endeavor.

This collecting started in his childhood growing up in New Philadelphia and continued well into his teens and now adulthood as he filled closets wherever he called home, whether it be Akron’s Highland Square or in Massillon, where he now hangs his vintage ballcap.

To thin the ever-growing collection, he turned initially to selling some items online.

But as this “collection” began creeping into every room in the house, Gascon said, he knew he had to get organized and develop a business plan, particularly if this were to become a full-time endeavor.

He’s now partnered with Akron’s Bounce Innovation Hub, which works with budding entrepreneurs to foster and grow new business ventures in the city.

His Modern Traditions Co. no longer calls his kitchen table home and has taken up residence in a space that faces the elevator on the fifth floor of a sprawling former Goodrich Tire building on South Main Street in Akron.

This space allows him to not only sort and inventory what he has from children’s clothes to men’s and women’s apparel but also host periodic open houses, where folks can come in and shop.

Gascon, 31, said he’s had customers drive from as far away as Chicago and Columbus to look through his finds.

Aside from the mentoring to help figure out a long-range business plan, the innovation hub has provided ample space for him to map out a store concept with clothes separated by style and vintage, he said.

It also provided a place to display some of his cool vintage stuff, including the front of an old truck that greets visitors who make appointments to check out the wares or those who attend the open houses.

One thing he’s learned so far: There’s an audience for just about everything wearable.

T-shirts featuring pop culture characters from the ’90s are particularly hot right now, along with concert tees from any era.

A lot of times, customers are either looking for something quirky or hoping to relive a piece of their own childhood

Business really picked up after a video he posted on TikTok garnered half a million views in the blink of an eye. In the video, he showed off some of the unusual items he has up for sale.

And just as fast as people viewed the video, shoppers snapped up merchandise at one of the store’s open houses the same weekend.

Gascon said half the items for sale in the store flew off the shelves and racks.

A cool vintage tee can be had for as little as $10, while a vintage leather jacket can fetch hundreds of dollars.

Gascon is quick to point out while the notion that a piece of used clothing in a closet or a drawer can fetch this much money now seems absurd, you should see how much these same items are going for in larger cities like Los Angeles.

There is something to be said about living in Akron, where the prices on vintage clothing are still somewhat reasonable and treasures can still be found in area thrift stores, he said.

Some people bring items in for possible sale, Gascon said. He also has a group of friends who pick things up when they see them at a reasonable price.

But he still finds most of the items himself.

Sometimes, these items are found in the most unusual places.

Just the other day, he said, he was driving home and spotted an old clothing rack from a department store sitting out on the curb with the trash.

It is now in the store and being used to display clothes.

And then there was the old abandoned home on a property in West Virginia that a friend had acquired.

“It was in the middle of nowhere, and half of the house had fallen in,” he said.

They carefully made their way through what was left of the house and found a closet full of clothes.

The simple clothes were all from the ’40s and ’50s and were all well-worn.

By well-worn, we mean full of holes and with makeshift patches and other homespun repairs.

But Gascon said those who love authentic clothes also love the holes in the sweatshirts and coveralls harking back to a time when clothing simply was not thrown away.

These well-worn items can fetch hundreds of dollars now from the right customer looking for just the right authentic aesthetic .

Most of the items found in the store are carefully cleaned and sanitized. But there are some items — like those found in the closet of the abandoned home — that are best left in the condition they were found.

His wife is happy these clothes have found a new home outside of their house.

And he’s happy to have a separate workspace.

In the coming months, Gascon said, the goal is to hone a long-term business plan and begin to look for a permanent retail space to show off his ever-revolving collection of items for sale.

“This is the testing ground for my next steps,” he said. “Just being able to do something I enjoy and love is great.”

Hours: By appointment. Next monthly open house is Jan. 27th and 28th