The war against the private car in Europe is alive and well, and Americans should take note as the fight crosses the Atlantic. Call it pedestrian precincts, Vision Zero, or ultra-low emissions zones, the story is the same. Cars are bad, biking is good, walking is better, public transit is […]

The war against the private car in Europe is alive and well, and Americans should take note as the fight crosses the Atlantic. Call it pedestrian precincts, Vision Zero, or ultra-low emissions zones, the story is the same. Cars are bad, biking is good, walking is better, public transit is better still, and the best of all is to stay home.

European motor fuel taxes raise gasoline prices to $9 per gallon. Parking is difficult to find. The concept that cars are a boon to families and improve lives and choice of jobs seems completely foreign to France and the UK, two countries I visited this month.

Cities are being hollowed out by pedestrian precincts, with commerce for residents moving outside the centers of town, leaving the quaint city streets for tourists. Locals need not visit.

American transportation policy is mistakenly copying Europe, and it’s not only the higher gas prices and smaller planned electric vehicles. Bike lanes are proliferating and parking spaces vanishing. One example: the District Department of Transportation in Washington, D.C., is planning to reconfigure Connecticut Avenue, one of the major arteries into the city, by removing two major lanes of traffic and replacing them with bike lanes. The plan doesn’t account for fire engines pulling out of their stations or existing right-turn lanes. Other bike lanes in Washington see minimal commuter traffic.

With regard to parking spaces, the motto among U.S. transportation planners seems to be “if you don’t build them, they won’t come.” A planned reconfiguration of Union Station in Washington, D.C., will result in the loss of hundreds of parking spaces. Restaurants are taking over valuable curbside spaces for dining.

The war against the car has hurt Europe, and it will hurt America.

Today Montpellier boasts a pedestrian precinct, one of the largest in Europe, covering most of the city center. The main rail station and airport are not near the city center. As a result, those travelling from out of town must stop well outside town and take a bus or walk. That may be good for the heart, but it is not good for vibrant commerce.

Those who reach the pedestrian-only city center of Montpellier find little more than a tourist trade clutching to the relics of a once-proud commercial center. It’s filled with stores selling candies, baskets, ice cream, and trendy fashions. It is pleasant for tourism, but not for other uses.

When I visited earlier this month, hardly anyone was walking around 9 am, or even 10 am. The businesses that locals use that require transportation—such as supermarkets and hardware stores—have migrated outside the center. Montpellier’s war against the automobile has ended in complete vanquishing of the automobile. The central city is automobile-free, and seemingly people-free as well.

Like France, Britain has declared war on automobiles. The center of Cambridge, UK, used to be a commercial center. Now it is a pedestrian precinct filled with streams of tourists. Only residential parking is available outside people’s homes, so visitors and caregivers cannot travel directly by car. Pity the repairman who arrives by car in Newnham, a close-in Cambridge suburb, and expects to repair a sink or refrigerator. Cars have lost the war, and seemingly so too has the local population.

The greatest general in the war against cars is undoubtedly London. It has both a Low Emission Zone and an Ultra Low Emission Zone, with separate emissions standards for each. If a vehicle doesn’t meet these emission standards, the driver is charged about $15 per day, with license plate readers enforcing the law. The Transport for London website helpfully states that if your vehicle doesn’t meet the standards, “you could upgrade to a newer vehicle that meets the standards or an electric vehicle.”

In addition to the emissions zones, London has an $18 fee to drive into a central congestion zone between 7 am and 6 pm Monday to Friday and between noon and 6 pm on weekends and federal holidays.

European transportation costs fall unduly on those least able to pay, such as health care workers who need cars but have low salaries. They disproportionately affect people with large families, who need larger cars, but are prohibited from owning one by the environmental regulations. The same will be true in America.

Most disturbingly, the European war against cars meets little if any organized resistance. Where failing to adhere to environmental catechisms is a public sin, Europe slouches towards a dystopian society in which owning or using a large non-electric car—one of the greatest social inventions of the 20th century—is subject to public scorn.

European cities are making it as difficult as possible to operate motor vehicles, all in the name of reducing global emissions. But the reduction in emissions from European efforts is a drop in the bucket compared with increased emissions from China and India. And the cost to European citizens is immense. America, be warned.

Mon Jul 25 , 2022
NEWS | FEATURES | PREVIEWS | EVENTS By Ilene Dube, JerseyArts.com originally published: 07/16/2022 Behold the titles used by Rina Banerjee. They read like poems.   The one for her installation at the Hunterdon Art Museum, for example, where the exhibition Rina Banerjee: Blemish, In Deep Pink Everyplace Begins is […] 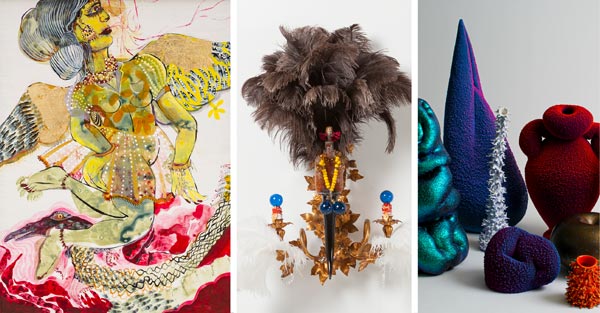