As Apple Inc. fends off a long line of patent suits in Texas, one name to know is Kelly Hart & Hallman LLP. The Texas law firm worked on nearly two dozen patent cases filed against Apple last year, all in the Western District of Texas, according to Bloomberg Law […]

As fends off a long line of patent suits in Texas, one name to know is Kelly Hart & Hallman LLP.

While Kelly Hart isn’t working most of the cases alone—the firm is often paired with national powerhouses like Kirkland & Ellis LLP, Morrison & Foerster LLP, or Fish & Richardson PC—it has logged more appearances for Apple in patent cases in the past 12 months than any other law firm.

The analysis focused on 53 tech companies that were listed in the S&P 500 in both 2020 and 2021. The data on outside firm appearances comes from Bloomberg Law’s Litigation Analyzer, which tracks company cases by measures such as the law firms involved and the types of cases worked on.

Most of the cases against Apple were brought by patent-owning companies who allege Apple devices, like the iPhone, infringe patented technology related to things like battery conservation or voice-enabled internet searches.

Kelly Hart partner J. Stephen Ravel has been the driving force, appearing in each case.

Based in the firm’s Austin office, Ravel has deep federal litigation experience in corporate work, including contract and bankruptcy, according to court records. His—and in turn Kelly Hart’s—patent work has expanded since Judge Alan Albright took the bench in 2018.

Albright has turned the Western District of Texas into a magnet for patent litigation, with more than 970 new cases filed there in 2021, about a quarter of all patent suits in the U.S. By comparison, in 2017 there were about 70 patent suits filed in the district. 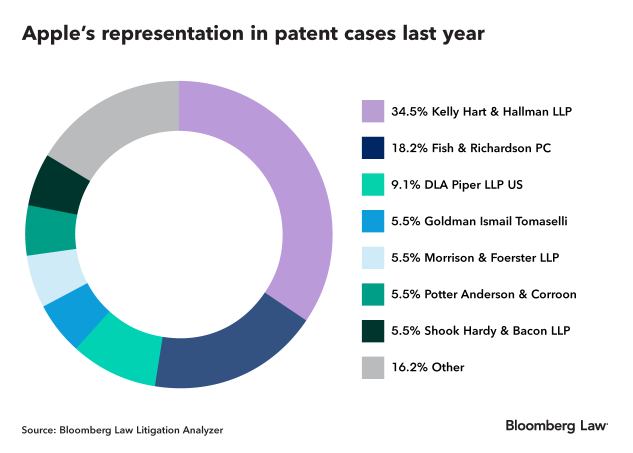 During the decade before Albright’s appointment, Kelly Hart averaged fewer than five appearances a year in patent cases, according to Bloomberg Law data. Those numbers jumped to 26 and 21 cases in 2019 and 2020, Albright’s first full years on the bench.

Last year, Kelly Hart did work in 44 new patent cases, the vast majority of which were in the Western District of Texas. Other companies it has done work for in addition to Apple include ., , and .

Kelly Hart is also doing work for in the chipmaker’s high-profile fight with VLSI Technology LLC in U.S. District Court for the Western District of Texas. Last spring, a jury hit Intel with a $2.18 billion patent infringement verdict, one of the largest ever. The next month, Intel won a verdict that it didn’t infringe other VLSI patents.

Ravel is part of a working group Albright has organized to help the judge draft rules for patent case procedure. He and his firm didn’t respond to requests for comment.

Unlike some places, such as Delaware, companies aren’t required to have local counsel in Waco, although Albright recommends it. Speaking during a recent conference, Albright said there’s benefit in having local counsel that is familiar with his rules and preferences.

That isn’t lost on companies like Apple that constantly find themselves in Waco, according to Jonas Anderson, a professor at the American University Washington College of Law. Anderson said those companies are drawn to people familiar with Judge Albright and his practices.

“Thus, Apple (and others) are inherently more likely to hire attorneys that are local, to complement their army of in-house and outside attorneys,” Anderson wrote in an email. 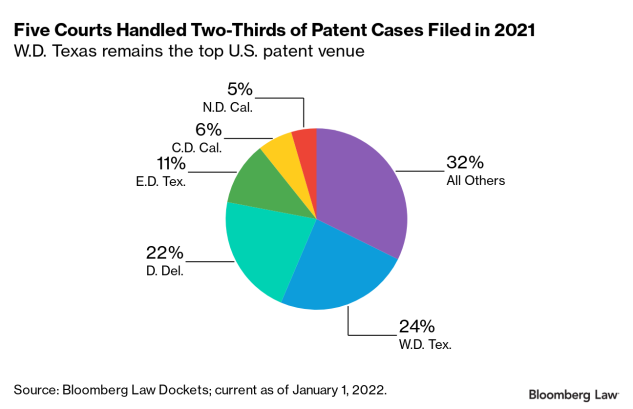 Competition for cases in Waco could increase. Anderson noted Winston & Strawn LLP, for example, has started renting space in Waco. The firm also recently announced it was adding to its roster the founders of the Austin-based IP and technology firm Shelton Coburn, touting the move as strengthening the firm’s coverage of Waco.

“If Albright can keep the cases flowing (and increase capacity, by being granted another judge who has the same approach to patent law) more firms will relocate permanently to Waco,” Anderson wrote.

How To Use Salt In Cooking - 7 Easy Tips

Mon Mar 28 , 2022
You may lay your hands on the best of recipes and cook something with utmost precision; you cannot call it a success unless it is seasoned properly. And when we talk particularly about seasoning, salt stands out as the key source of flavouring. Salt gives flavour, depth, dimension, and character […]