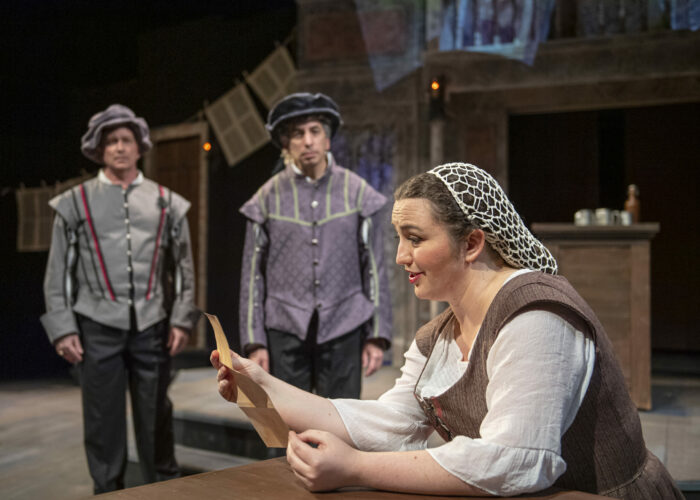 Every feature section of every newspaper needs someone who has the nerve to ask anybody anything. For most people, that isn’t easy. We worry that the celebrity we’re interviewing will look down on us or consider us rude. We know we want to get the very best story, but when the moment comes, we get awed or embarrassed, so we pull back a little, perhaps because the other person is famous and we’re not.

Fortunately, for the better part of a half-century, The San Francisco Chronicle had Ruthe Stein, who cannot be awed, embarrassed, shamed, bullied, cowed — or stopped. Her focus and good-humored relentlessness, among other things, have made her one of the best interviewers in the business.

On the stage of the Smith Rafael Film Center, she will discuss the art of interviewing and talk about her new book, “Sitting Down With the Stars.” The conversation will be followed by a screening of the film “Bridget Jones’s Diary.”

One of the benefits of having a composer among the ranks of an orchestra’s membership is the opportunity it provides to introduce new works to the public. Timothy Higgins is best known as the San Francisco Symphony’s principal trombonist, but it turns out he’s a composer as well.

With Music Director Laureate Michael Tilson Thomas conducting, a triumphant return to Davies Symphony Hall after recovering from brain surgery, Higgins will now give the world premiere of his new Trombone Concerto — with none other than himself as soloist. Works by William Grant Still and Aaron Copland complete the program.

Richard Burbage is dead, which means more than the loss of one of the greatest tragedians of Shakespeare’s day. “Who knows the speeches now?” asks a dismayed John Heminges (Anthony Silk), financial manager of the King’s Men.

Even Shakespeare’s actors don’t have full copies of scripts, just their own lines. Sure, hastily copied versions of the plays are in circulation, but they’re doggerel. Burbage (John Musgrave) was the entire institutional memory.

Lauren Gunderson’s “The Book of Will,” now in a Foothill Theatre Arts production, finds a kind of meta-drama in Shakespeare — neither in the man himself nor in his plays, but rather in how they came to be published in what’s now known as the first folio.

It’s a scrappy, plucky endeavor helmed by underdogs with no publishing experience and even less money — a bit like mounting a play out of thin air to save the day.

Ars Minerva revives a long-forgotten operatic farce of the Baroque

For centuries, composers have been turning out operas by the thousands — most of which quickly fade into oblivion. Ars Minerva, the adventuresome opera company headed by mezzo-soprano Céline Ricci, has adopted the mission of plucking the forgotten works of the 17th century from obscurity, one piece at a time.

The company’s latest undertaking is “Messalina,” a 1679 opera by the little-known Italian composer Carlo Pallavicino. They’re billing it as “a sex farce with teeth,” which certainly tallies with what we know — or think we know — about the titular Roman empress.

For this production, Ricci once again serves as stage director, and Jory Vinikour conducts a cast led by soprano Aura Veruni in the title role.

Even in a theatrical era defined by loss and work-arounds, new companies are still being born. And one of the most recent newcomers, the Filipino American outfit Chikahan Company, is entering Bay Area theater with a play that both speaks acutely to our present moment and opens wide into the wilds of myth.

Lauren Andrei Garcia and Conrad A. Panganiban’s “The Act of Care” begins at a hospital’s night shift, as a pair of overtaxed nurses try to take care of a corpse. Soon, the bad news comes: There’s a mysterious virus, but only their hospital seems to be affected.

Then everything shifts as three mythological creatures appear — the maternal Batibat, the impish Kapre and the purehearted Calag — each hailing from a different region of the Philippines.

Chikahan, which was established in March, is led by three artistic directors: Ely Sonny Orquiza, Krystle Piamonte and Alan S. Quismorio. “The Act of Care” is presented as part of PlayGround’s Innovators Showcase.

S.F. Symphony Youth Orchestra is back in action after a long shutdown

Like so many other performing arts organizations, the San Francisco Symphony Youth Symphony has spent more than a year waiting out the pandemic shutdown. The orchestra’s young musicians have had weekly sessions over Zoom with Music Director Daniel Stewart and taken part in coaching sessions and online workshops — in short, done everything except actually playing music together in person.

Now, the time has finally arrived for the group to do what it was designed for. In the long-awaited first concert of its season, Stewart will lead the ensemble in Jessie Montgomery’s “Starburst” and Dvorák’s “New World” Symphony, and percussionist Shun Lopez — who won a competition to get here — will be the featured soloist in Hristo Yotsov’s Concerto for Drum Set and Symphony Orchestra.

One of the most notable early narratives in the racial history of classical music centered on Dvorák’s extended sojourn in the U.S. during the 1890s. He became fascinated by the African American music he heard, some of which found its way into his compositions — an important transfer of influence, and not without its own complications.

The Diablo Symphony’s season-opening concert, led by guest conductor Emily Senturia, alludes obliquely to that history. It features music by two prominent Black composers, Adolphus Hailstork and the still too little-known English composer Samuel Coleridge-Taylor. Dvorák is represented by his Eighth Symphony — which precedes the composer’s American travels, but we can let it slide.

‘Cerri: The Art of Two Generations’ explores work by father and son

A new exhibition at the Museo Italo Americano explores the work of Giancarlo and Giovanni Cerri, a Milanese father and son who are both artists, but with very different visual languages and subject matter.

Giancarlo Cerri’s portion of the exhibition, titled “Abstract Sequences,” features 18 paintings from 1995 to 2005, a period when the artist was exploring themes of essentialism and compositional rigor after many years as a figurative artist. The “Sequences,” as the artist labeled the series, are unique in his work for using only two or three colors, usually primary hues that are often juxtaposed with black.

Giovanni Cerri’s section of the show, “Milan in the Hour of the Wolf,” is a reflection on his experiences in Italy during the COVID-19 pandemic. The new series of paintings, mixed media and paper works was inspired by research the artist did, while sheltering in place in 2020, on pandemics of the past including the 1576 and 1630 plagues that broke out in Milan. The series’ title references the 1968 Ingmar Bergman film “Hour of the Wolf.”