Philharmonia Baroque communes with Bach in time for the holidays

Richard Egarr’s first live season as music director of the Philharmonia Baroque Orchestra & Chorale has so far been a little light on the music of the Baroque — and particularly that of Bach, which is a specialty. But that’s about to change.

S.F. Opera’s Adler Fellows get a showcase performance to themselves

Like seedlings watching for the right time to sprout, the San Francisco Opera’s Adler Fellows have been patiently waiting out the long pandemic hiatus. They’ve done coaching sessions over Zoom and stepped in for whatever was needed, because that’s the job description.

Now it’s time for these young artists to come into their own.

The annual showcase program titled “The Future Is Now,” a series of operatic arias and ensembles, is always a welcome opportunity to see what the Adler Fellows can do. This year, with Music Director Eun Sun Kim conducting and with live performance finally returned, it promises to be more exciting than ever.

The late 1980s and early 1990s were the boom years for stand-up comedy in America, and San Francisco was a premiere location.

Filmmaker David Schendel was there, documenting this unique cultural moment and capturing the great comedians of the era — Robin Williams, Will Durst, Dana Carvey, Paula Poundstone — when they were young or at the start of their careers. Schendel has edited that raw footage into an important new documentary, “The Comedy Club,” which will be screened Saturday, Dec. 11 at the Roxie Theater, as part of a benefit for Durst, who suffered a stroke two years ago and is still recovering.

The Schendel documentary is something rare. Usually, if filmmakers want to make a film about a historical period, they have to rely on found footage or on interviews with people who were there. But because Schendel was there himself and filming in real time, “The Comedy Club” has a rare immediacy.

See it either to remember, or discover, a remarkable piece of Bay Area cultural history — and to help out Durst, San Francisco’s own modern-day Will Rogers.

A new chamber music series opens for the Berkeley Symphony

The Berkeley Symphony is still getting ready for its first post-shutdown orchestral season under Music Director Joseph Young, which gets under way in February. But first, the organization is launching an innovative new chamber series, featuring an impressive and diverse range of music and performers.

Connie Champagne has long been a San Francisco favorite for her explosive vocal stylings that turn every song into a master class in storytelling. She’s also known for her haunting take on the legendary Judy Garland and has built several cabaret shows around her performing as the late icon — sometimes revisiting the “Wizard of Oz” star’s own repertoire, and more frequently giving the audience Judy-ized versions of songs that came out after the singer’s death in 1969.

For the first time since the pandemic began, Champagne brings her holiday show “Have Yourself a Merry Little Christmas” back to Martuni’s in San Francisco for two shows. Accompanied by Tammy Hall on piano, Champagne plans to sing seasonal favorites and Garland’s hits, as well as bantering in character as Garland between songs (as much of a treat as her singing.)

What Champagne does goes far beyond impersonation: Her ability to re-create the essence of Garland onstage while diving into the vulnerability at the core of the performer is somewhere between spirit channeling and method-acting character submersion. This year, couldn’t we all use a little Judy for the holidays?

Erika Chong Shuch and her co-conspirators Ryan Tacata and Rowena Richie are restless artistic experimenters, forever asking what theater is and what more it can be, naming and dismantling assumptions that are so baked in they can be difficult for others to see. Paramount in their investigation is the audience-artist contract: What does each party give to and get from each other?

Their latest collaboration, “The Welcoming,” takes place in KQED’s new venue, the Commons. It’s the latest in their “For You” series, in which artists make pieces specifically for particular audiences. During the pandemic, the trio organized dyads of artists and older adults at heightened risk of isolation. “The Welcoming,” which is presented by KQED Live and Dancers’ Group, grew out of that work.

The evening comprises lecture, small participatory rituals and pop-up performances, including drag by El Beh and Morningstar and a sermon by Dominican nun Sister Clarice.

Sydney Cain is in the midst of an important moment in the Bay Area art world.

The San Francisco artist is the subject of the exhibition “Refutations,” on view at the Museum of the African Diaspora as part of the museum’s emerging artist series. Cain’s large-scale commissioned mural, “Radio Imagination,” is also on view in “Mothership: Voyage Into Afrofuturism,” which reopens to the public Friday, Dec. 3, at the Oakland Museum of California.

The artist’s first solo show at the Rena Bransten Gallery, titled “Sydney Cain: Dust to Dust,” is also set to be on display starting Saturday, Dec. 4. The works on paper that make up “Dust to Dust” involve sifting, rubbing and erasing black pigments to create “personal mythologies beyond mainstream colonial narratives,” according to the gallery statement. The eventual images revealed in the work are populated by shadowy figures whose ambiguous facial expressions question both the nature of history and linear time itself.

Fri Dec 10 , 2021
Her love of vintage fashion started when she saw the movie Grease (Picture: Little.bri.boop/Caters News) After swearing off fast fashion, vintage lover Bri Serjeant has been thrift shopping and making her own clothes to hone her retro style. Although her passion for 50s style fashion began when she saw Grease […] 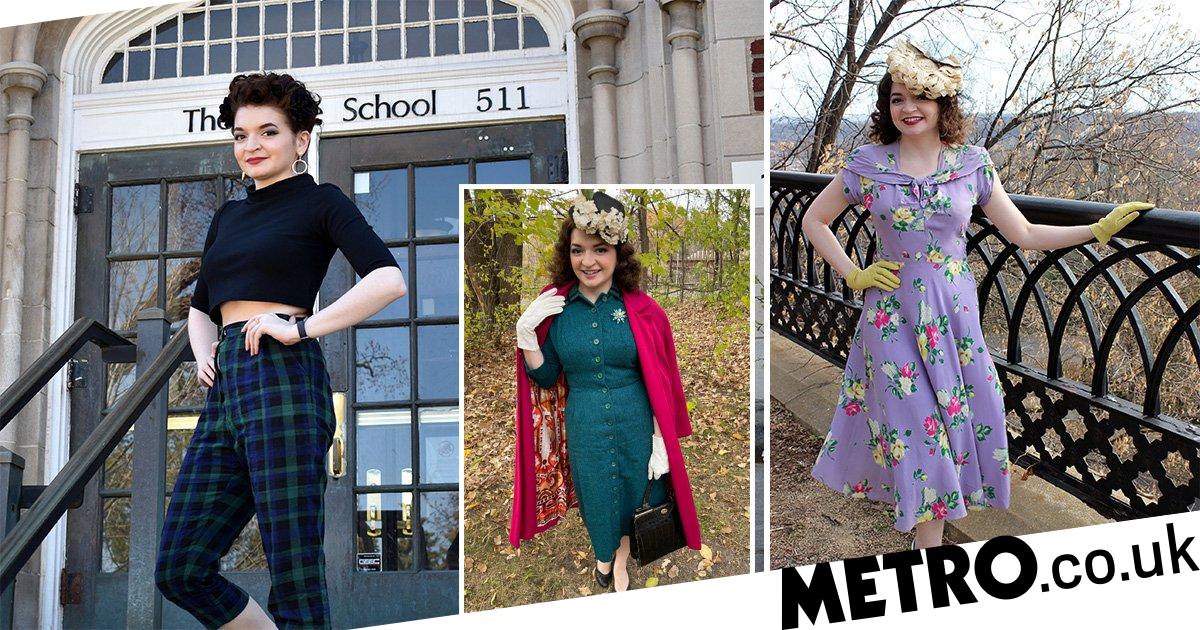